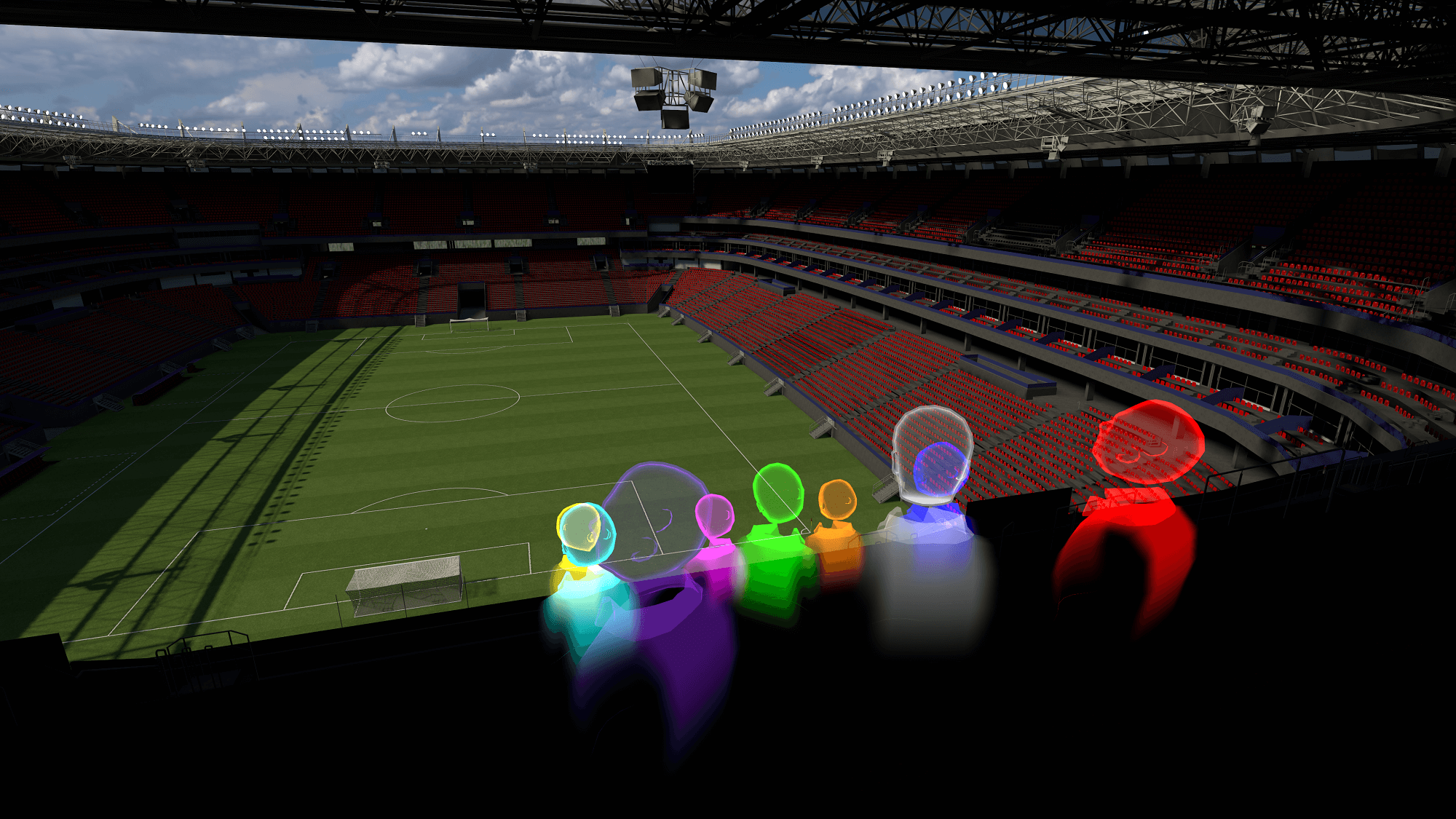 Immersive and mixed reality creators Holovis has completed the three initial environments that users will be exposed to in the University of Exeter VSimulator setup being installed at Exeter Science Park.

These include a bridge, a sports stadium and an office in a high rise building. When the nine users put on the Vive Pro headset, they will find themselves in one of these customisable environments. They are able to fully move around the space, which has been optically tracked to sub mm precision, and will see avatars of the other participants in their exact locations.

We can then introduce varying amounts of movement via the custom designed E2M Octopod motion platform and custom made AMTI force plates to create different environmental conditions and measure the reactions, looking at human perception monitoring, psychology and physiology.

Within the stadium, this could be caused by everyone jumping up to celebrate a goal being scored and on the bridge or in the office, it could be the disturbance as multiple people cross and move around. These effects might be very slight, but we can accurately measure and analyse what levels create responses and understand what they are.

Holovis has created the environments using real-time media powered by a game engine. This means the operator can tailor the scenarios through audio, media and motion differentials to exactly what they want to measure, recreating the same multiple times or introducing different variables, powered by NVIDIA® GeForce® RTX graphics cards to future proof the solution. 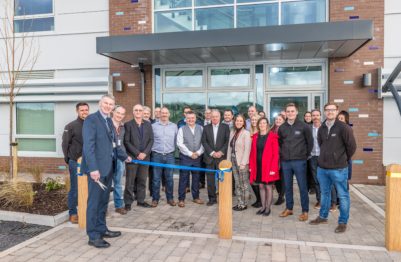 Distinguished guests have gathered to participate in a special ceremony, to mark the handover of a new building that will house the University of Exeter’s pioneering VSimulators experimental facility. 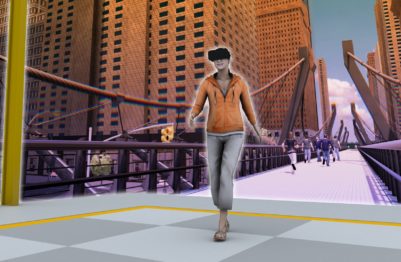 University of Exeter have a number of EPSRC fully-funded PhD studentships starting in September 2020. Applications close on 30th January 2020. 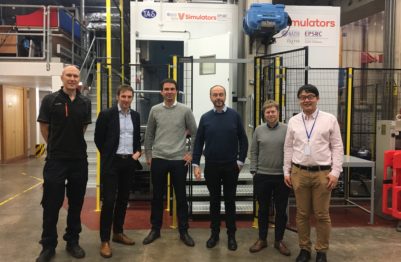 Delegates from AKT II visited VSimulators at University of Bath to experience the full capability of the platform and explore future research collaborations. 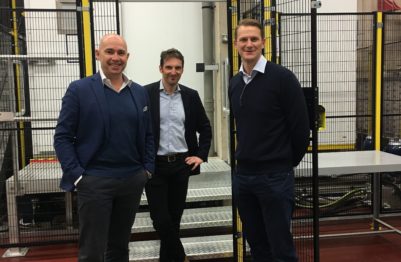 REDS10 Visit VSimulators Platforms at Universities of Exeter and Bath

Matt Bennion and Paul Ruddick (CEO) from REDS10 visited Universities of Exeter and Bath to try out the VSimulators facilities, and discuss future collaborations. 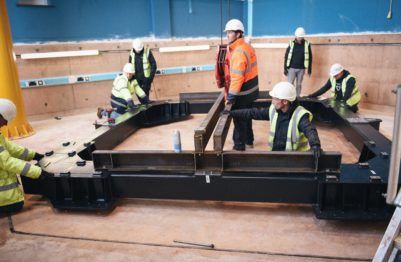 Installation of the VSimulator facility at Exeter Science Park is well underway, following a week long operation with multiple project partners to assemble the motion platform. 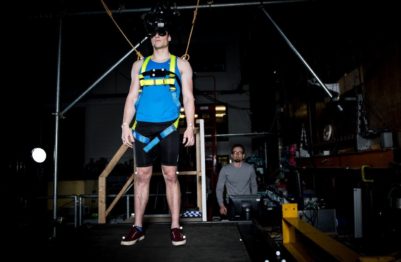 Dr Mateusz Bocian from the University of Leicester, awarded £414k for a project to develop a new class of pedestrian structural loading models calibrated with data from in-situ measurements 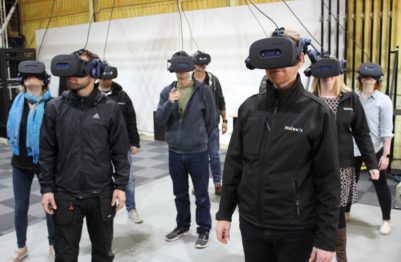 Experience designer Holovis has devised a bespoke rigging system that retracts and releases the cables powering the virtual reality experience for the University of Exeter’s VSimulator. 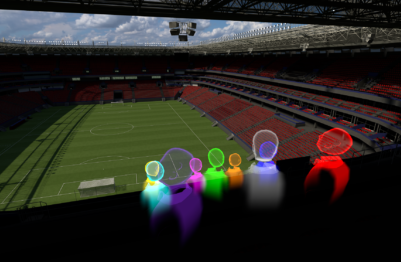 Immersive and mixed reality creators Holovis has completed the three initial environments that users will be exposed to in the University of Exeter VSimulator setup being installed at Exeter Science Park. 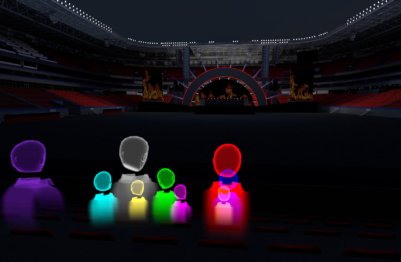 Experience designer Holovis has completed a crucial part of the University Of Exeter VSimulators setup: successfully incorporating nine users collaboratively in a virtual environment while simultaneously collecting data about their experience. 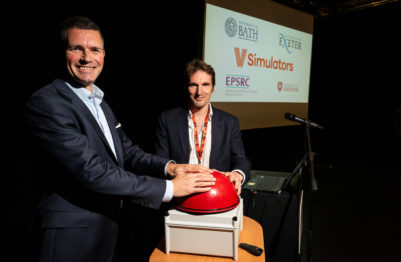 A moving chamber equipped with virtual reality projection will aid the study of people's reactions to different environments, including swaying skycrapers and bridges 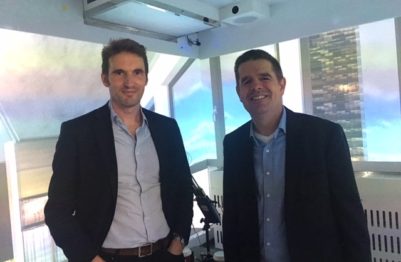 The VSimulators team at University of Bath were pleased to welcome Dr Roy Denoon from CPP Wind Engineering and Air Quality Consultants. Dr Denoon is an industry-leading specialist in wind engineering for tall buildings. 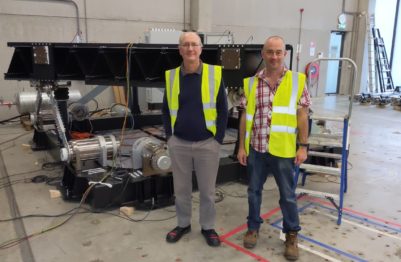 The VSimulators team from University of Exeter recently went to E2M Technologies in Amsterdam to put the facility’s finely tuned motion platform through its paces. 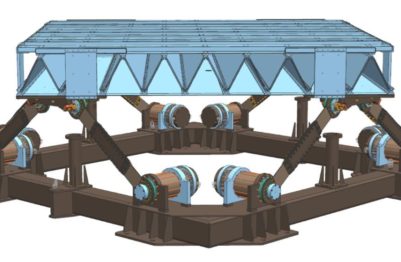 First Moves From VSimulators Platform Under Construction for University of Exeter

After two years of design, followed by manufacture and assembly of the component parts, the VSimulators platform at E2M Technologies at Amsterdam is switched on to perform its first moves... 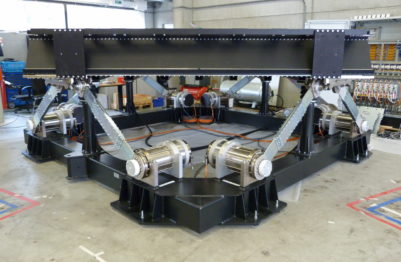 In The Netherlands, the VSimulators motion platform, has been constructed to our exacting specifications by E2M and Holovis, ready for factory acceptance testing. 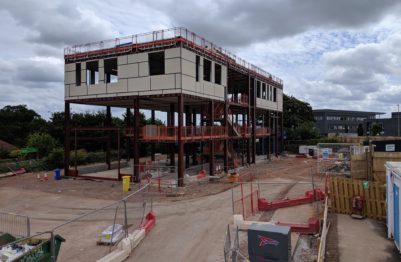 Construction of the building for University of Exeter VSimulators research facility is rapidly progressing and in recent weeks the project has reached key milestones. Factory acceptance testing in Amsterdam will take place imminently, before delivery of the equipment and installation into the University of Exeter Engineering Research Centre. 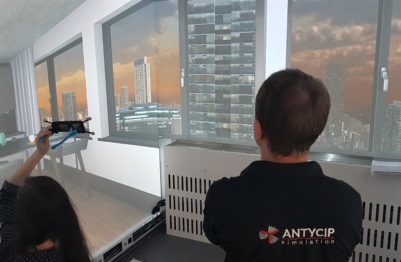 VSimulators at University of Bath Reaches Final Stages of Construction

The installation of the unique VSimulators facility at the University of Bath is nearing completion, enabling multi-disciplinary research into human responses to the built environment, focusing on people’s health, well-being and productivity. VSimulators will combine a motion platform, environmental control chamber and projected virtual reality. 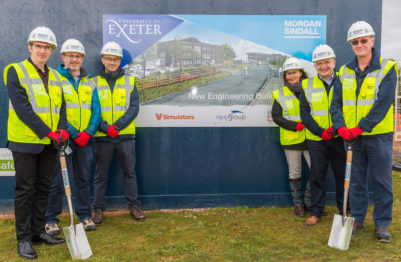 A turf-cutting ceremony marked the start of construction of the University of Exeter’s pioneering VSimulators - a state-of-the-art, world class facility, combining virtual reality for up to nine occupants with a sophisticated motion platform.

Plans for a major new centre for research and development in the vibration engineering sector are in the final stages of development at the Universities of Exeter and Bath. 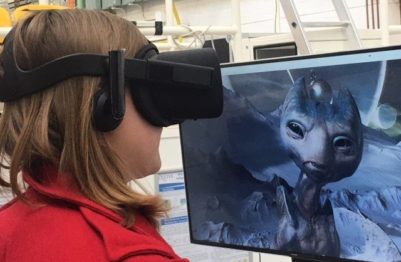 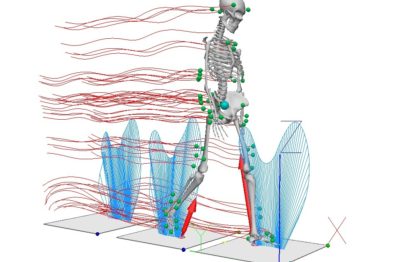 Human factors simulation for motion and serviceability in the built environment

Vibration Engineering staff led by Professor James Brownjohn have been awarded a £3.25m grant by EPSRC to create a new simulator facility for study of interactions between humans and the moving built environment. 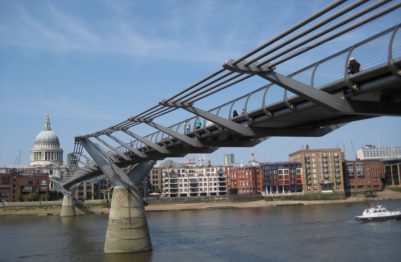 The impact of vibrations from very tall buildings and wobbly bridges and floors on people’s health and wellbeing is to be researched in a new £7.2 million government-funded national research facility. 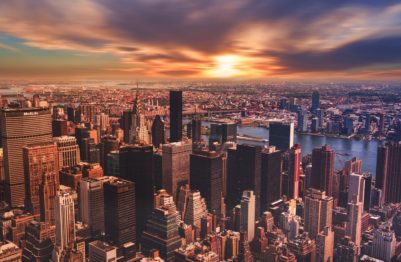 The Telegraph news article publicising EPSRC funding for Universities of Exeter, Bath and Leicester to build the VSimulators facilities to research impact of motion on building on occupant health and productivity.